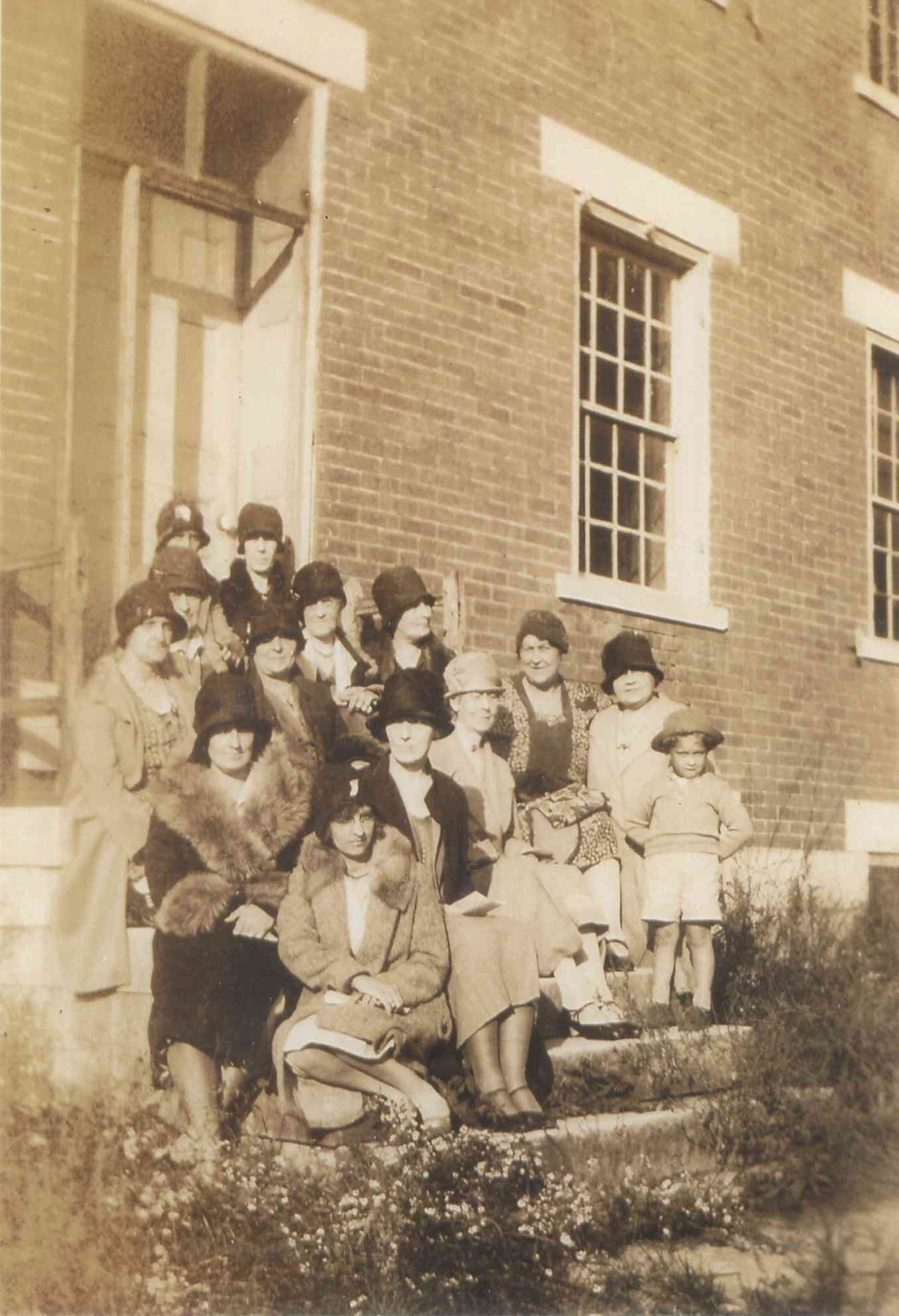 [pictured above: One of four “kodaks” made that day in October 1929. The subjects are unidentified although one may be Miss Nora O’Connell, Regent.]

During the early part of the 19th century the South Union Shaker Village drew visitors from all  parts of the country, either to attend public worship services on Sundays or to spend the night and dine at the village’s Trustees Office.

After the Civil War and into the early 20th century the number of guests only increased, initiated by the construction of South Union Station at the railroad crossing and by a growing interest in the Shakers as history. Thanks to a recent donation of a 1929 newspaper article and accompanying photographs we have discovered that there was even interest in visiting the former village only a few years after its dissolution in 1922. Many thanks to Patricia Cauley Foster for sharing the documents.

According to the article, on October 8, 1929 fourteen members of the Russellville Chapter, N.S.D.A.R. held its meeting at “historic old Shakertown.” The group made the trip in four automobiles on what the writer called the “fine Federal highway, No. 68” and then added that the “lovely Kentucky landscape, which bathed in the soft radiance of an absolutely perfect October afternoon, lent charm to the occasion.” “No relics remain,” the writer continued, “save the old brick houses and some lovely trees of various Species. Looking at the clean-cut, classic lines of the buildings, straight and true, even to this day, one is impelled to believe that a people who expressed their personality in such types of architecture must have been of a pure and lofty character.”

The program for the day was a reading from Charles Edson Robinson’s “The Shakers,” [published in 1893], the excerpts from which were provided by the Extension Department of the University of Kentucky. This was followed by the reading of a letter sent to the chapter by Mrs. Alice Hines Walcutt of the Kentucky State Library. The article noted that Mrs. Walcutt’s letter contained “personal reminiscences of the Shakers who, in her childhood, visited the home of her father, Judge Thomas Hines, of Bowling Green . . . attorney for the Shakers.”

The writer ended the article by mentioning that a “delicious picnic” was served, then penned closing remarks in sentimental language characteristic of the time: “If, indeed, the gentle spirit of the departed brethren viewed the scene from the “Farther Shore,” they perchance smiled happily remembering the October afternoons during their earth-life long years ago, when like picnic groups gathered on their hospitable grounds to wile away the sunny hours on an autumn day.”